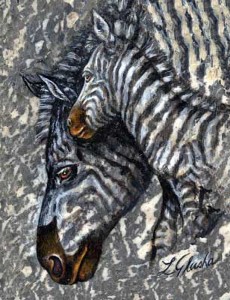 Our bus ride to Houston took 24 hours. The country we drove through was so beautiful that I did not feel tired even though the trip was long-in fact the rolling hills, majestic greenery and beautiful skies relaxed me.

We had two reasons to go to Houston, first that it was the next zoo on the way back to Los Angeles, and secondly one of my closest friends had moved there from New York some years before. She was an opera singer with the Metropolitan Opera and I had spent many years as her pianist in her practice sessions.

As the bus pulled into Houston, I was dismayed at all of the tall office buildings I saw. Somehow I had thought of Texas as a state with lots of open space, as a place where one could breathe. In the years since I moved to Los Angeles the city had become so crowded with packed freeways and new buildings that it’s true beauty was being destroyed. I did not expect to see the same thing in Houston.

We spent a lovely evening with our friends. The fact that so many big office buildings were being constructed did not bother them. The people were warm, and as my friend said, “much nicer than New Yorkers”.

The next day we went to the zoo. Considering how crowded the city was, it did surprise me at the appearance of the zoo. It was set off in an area away from the business section. It was apparent that the people who ran the zoo and the many volunteers were determined to maintain a beautiful zoo. It was not as large as the St. Louis Zoo, but had a lot to offer. I looked for the administration building and could not find it and ended up in the reptile house. The curator of reptiles was there but was on his way to a meeting. He suggested that I go to the director of education. One of the thoughts that keeps coming back to me was the similarity of the St. Louis Zoo and now the Houston zoo. It was their focus on education both for the general public and for the schools. They each had a department of education, mostly manned by volunteers, and had regular programs, not only for visitors to the zoo, but also involving the schools. This was 1978.

I met Suck-a-toe in 1972 and began lecturing in the schools in 1974. At that time there was no one from the Los Angeles Zoo that was doing anything in the schools. I remember so well when I gave my first lecture, not one of the teachers I worked with knew what an endangered species was. It was not even discussed in the classroom. I was the first to talk about that and the fact that the habitats around the world were being destroyed by giant corporations for the products they wanted. GLAZA, the greater Los Angeles Zoo Association, had a charter from the city and they ran the zoo. However, GLAZA had no program to go into the schools.

What amazes me, even now as I think back, it was just a couple of years later when I went to the St. Louis zoo, and now to the Zoo in Houston that I found out how much was being done to inform children of was happening to our world. Also, these zoos were free to the public. The Los Angeles Zoo was never free to the public. The Houston zoo has an active docent program – about 100 people . They saw about 50,000 children last year – 1-5th grade. They lecture in hospitals, occasionally to adults. They have ecology programs in conjunction with the arboretum. They speak to junior high and college students. Their aim is to speak to the entire population. Their docent program takes six weeks. They have some men, but mostly women. They give a ground tour 1-2 grade, and a self guided tour to children 4-5th grade which points out the endangered species they are working with. I asked how they get their money. It is from bond issues and many fund raising activities by the zoo association.

All zoos have programs wherever possible to breed endangered species. Depending on the climate where the zoo was located they work on those programs. I did not know that when I first started my trip. However, they each have special features for the public and I found those intriguing.

We visited the gorilla exhibit which was housed in a big building. Because of the heat of Houston, and to keep the animals healthy, it was safer to keep them where the temperature could be controlled. It was a lovely exhibit with an indoor waterfall and beautiful shrubbery. The problem, apparently, was that the noise of the public who was separated from the gorillas by an indoor moat, was very loud. I was told by the keeper that the female gorilla could not stand the noise and for a while kept pulling out the hair on her arms and stomach! She then later resorted to putting her fingers in her ears. The whole time we were there, her fingers were in her ears.

Each of the zoos has a children’s zoo. In this case among the babies, they had a baby camel – 14 weeks old which was being held by a girl keeper. I asked her if I could touch it. As I asked her, the camel turned around, came over to me and started to wash my face with his tongue! She said she was astonished at that because he rarely does that to strangers. I could not get over the beautiful feeling of the fur – like a real camel hair’s coat. I spoke to this young lady for some time. She told me of the dedication of the nurses to their charges. They had a diabetic monkey which needed cheese. They had no money for it – so the keepers chipped in their own money to feed it. She said they often stayed all night if an animal needed special attention. At the children’s zoo they also had a precious crab-eating macaque. He was about 6 inches long and he kept doing his exercises on a towel strung from a log. The nurse gave him a teddy bear four times his size which he really spent time investigating.

To me the most outstanding exhibit of that zoo was the exhibit of the nocturnal animals in the small primate house. I had never seen such an exhibit before. Whenever I saw an exhibit of nocturnal animals such as the slow Loris they were always asleep, because they sleep during the day. Here they created a most unique situation. They had an area with all red lights – in fact- when you walked in, it seemed really dark. This was meant to simulate night. At night they have on bright lights so the animals think it is day and sleep. I could not get over the enormous activity I saw for the first time of the bush babies – with their enormous eyes. They were an absolute delight to watch as they flew around the cage. It was the first time in my life I saw vampire bats. – truly an eerie feeling as they hung by their tails. There were many of them in the exhibit.

The question that I wanted to ask about “the humanity of animals” did not come up. There was no one that I met at the Houston zoo to ask the question. However, the dedication of all the people I met there was such that I felt I knew the answer. They were dedicated and I think would have been surprised had I even brought up the subject.

One thing more is to be said about Houston. The huge buildings and the crowded freeways made me sad. I could see Houston going the way of Los Angeles. In talking to the taxi driver who took us to the bus station he pretty much expressed my feelings. He said that he used to love to drive, but now as many as 2,000 people are moving in each week, and as many cars. He said he yearns for his homeland in Louisiana with the backwoods and the squirrels. However, he said, much of that no longer exists.