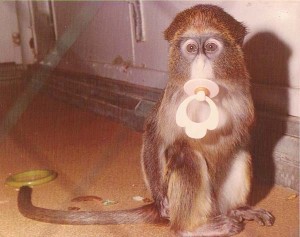 I spent quite a bit of time with the people in education. They were not only dedicated, but so anxious to share with us what they were doing not only in the schools but with the general public. They had an auditorium that seated 80 people. Their program took 1¼ hours in which they not only displayed the animals but gave the public a real picture of what it was to run a zoo. They lectured to about 650 people a day and at this point had spoken to almost 30,000 people . All of this was done by 3 people. They told me that they not only did the secretarial work, but when an animal died, they boiled off the flesh so that they had skeletons as part of their display. I will add that they were thrilled when I told them of my work in the schools and were so excited when I showed them the drawing book I had created for the teachers.

After my meeting with the education staff I continued visiting the zoo. I went to an exhibit of Adoudads, also known as Barbary Sheep. They were in an enclosure with Gelada Baboons. It was wonderful to see how they interacted. They lived in perfect harmony and there were times I saw the baboons grooming the Adoudads. It so reminded me of when the Red Flanked duikers were introduced to Suck-a-toe and the marvelous way they interacted. (Duikers are small deer, more or less in the family, I would say with the Adoudads.)           Although Missy would have no part of that, Suck-a-toe bonded with them immediately. In fact I was so sorry when they were removed from Suck-a-toe’s exhibit and replaced with the Bat-eared foxes. He lived comfortably with the foxes but there was no friendship.

Because of my experience at the Los Angeles Zoo and of my knowledge about animals, I always look to speak to keepers. No one goes into that profession unless they love animals and these people are not only knowledgeable, but are generally so warm and friendly and anxious to talk about their experiences with the animals.

At one of the exhibits I met a keeper and when I told her of my time with Suck-a-toe she shared with me an experience she was currently having. It seems that there was a spider monkey that had been someone’s pet and was donated to the zoo. When the monkey was introduced to the spider monkey exhibit it was immediately rejected by the group and brought to the children’s zoo to be raised by the nurses – a story similar to Suck-a-toe. The difference was that not only was Suck-a-toe taken care of physically, but he was also given a lot of love by all four nurses who tended to him.

At that time studies were being made of rejected monkey babies of whatever breed to see what effect love and attention had on their physical and emotional development. The spider monkey was given a blanket which was thought to give the animal a sense of security, proper food, but no love.

They began to notice that not only was he disintegrating emotionally, but also physically. After 4 months the zoo personnel realized that they had done the wrong thing and asked this keeper to take it home to work with it. She was married to a keeper at the zoo and so there was no problem bringing home this baby monkey. As she told me, she not only fed it, but mostly gave it the love it had never received. She said it took time, but after a while it did recover mentally, but physically it was destroyed. The legs never grew straight and the teeth – the big canine teeth never developed. To me the similarity to human babies that were abused and baby animals particularly among primates cannot be disputed.

As I reached the exhibit of the Hamadryads Baboons, I saw an interesting interaction in the family unit. There was a large dominant male who walked around very self-assured and a whole group of adult females and sub adult males and females. One of the females had a baby on her back. As I watched, two of the younger members grabbed the baby by the back of his neck and pulled him to another part of the cage. With that the whole troop moved over and within one second the big male and the mother flew over and were carefully watching the proceedings. Frankly I thought they would attack the two who in my opinion were quite rough with the baby. To my surprise they just stood and watched. The baby was not hurt and then they let it go. The keeper told me that apparently that kind of behavior was not uncommon and apparently part of the process the baby had to go through while growing up.

My interest although in all animals was particularly in primates. I had a discussion with one of the curators about particularly the great apes. At the LA zoo when I would attend the meetings of the keepers there was often discussion about breeding of the great apes. It was thought by many in the field that the great apes did not have the natural instincts to rearing their young. They came to that conclusion because the great apes in zoos around the world were not breeding. In many cases because they were so endangered they would artificially inseminate them in order to have offspring.

In the natural state the young gorillas or orang-u-tans would be part of a family group and as babies were born the family group would participate in the rearing of the babies. In the case of most zoos in the world, the mother had been killed by poachers and the babies were brought into the zoos without the natural training they would have received in the wild. I had a conversation with the curator of mammals and he said some of the females do have the natural instinct to rear their own and in the case of the St. Louis Zoo, they have a female orang-u-tan who is rearing her own. I was anxious to visit that exhibit. When I got there I saw the female holding her infant who was probably two months old. There was also a juvenile female with her. The male was kept separately. It was such a delight to watch. The baby would cling to her and then climb on the fence. The mother moved to the far end of the cage and the baby followed. Suddenly the keeper who was cleaning the gorilla cage which was next door splashed water on the other side of the glass

With that the mother flew over to her baby, grabbed it in her arms and the two of them stared with mingled fear at the water. About an hour later the mother carrying her baby in her arms went to the back of the cage, pulled open the door and walked out and closed the door behind them.. That was the last I saw of them

For the first time in my life I saw a bush baby, a little prosimian which was eight years old. I had never seen anything so cute. It had huge eyes and it kept opening its mouth and sticking out its tongue as I touched it. It felt so soft and almost like velvet. Then I was shown a bat. I had never seen one. I am not sure if there were any at the LA zoo. It looked about six inches tall and I was told that the wing span was over four feet. Looking at this tiny creature four feet seemed preposterous. The keeper actually forcibly opened the wing. It was folded up like an umbrella. When I think of it even now, it seems almost unreal. All I can say is that nature sure has amazing tricks of construction.

Among the attributes of the St. Louis zoo was a wonderful train that ran throughout the park. We had such limited time to spend and we took advantage of the train ride. There were so many exhibits that we merely touched on, such as the beautiful polar bear exhibit, the flamingoes where for the first time I saw a baby flamingo. It’s color was a cool gray and it would have been so interesting to have seen the babies develop as they reached maturity. After all to witness how nature takes a cool gray and turns it into a flaming wild orange-red color seems incredible to me. With Suck-a-toe I really feel fortunate that I saw all stages of his development with the three color changes I had read about, but actually witnessed as he grew up.

The trip to the St. Louis Zoo to this day is etched in my memory as one of the great experiences of my life. I am so glad that I have the notes to fill in the holes that I would not have remembered and it feels so good to share it with my readers.