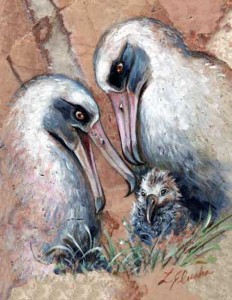 We had heard a lot about San Antonio and I was very anxious to visit the town before we went to the zoo. Frankly I was shocked when I first saw it. I had expected to see a beautiful place. Instead I saw such poverty. It almost made me cry. Then someone we met told us to go downstairs and there we saw an entirely different scene – it was like a city below a city. On the lower level were river boats, beautiful outdoor restaurants, gorgeous trees and all kinds of shops. This river boat traversed the city. We took a ride and loved every minute of it.

We were fortunate to get a motel across from Brackenridge park which houses not only the zoo but the Oriental Sunken Gardens, a small museum and other points of interest. The zoo, similar to the other zoos we visited was in a beautiful part of the city with lush greenery not only surrounding the zoo, but throughout the zoo itself. A little toy train that we took later in the day traverses the entire park, through beautiful jungle-like territory;

As soon as we got to the zoo I went into the administration building and asked to speak to someone in education or one of the curators. To my astonishment, the zoo director, Louis R. DiSabato, himself came out to see us and ushered us into his office. As I look back I was amazed that neither he nor the other people I spoke to in the other zoos even asked to see any of my papers that I carried with me. I had so many letters of recommendation and newspaper articles with me but for whatever reason the people I met believed me and treated us like royalty.

Shortly after he invited us into his office he received a phone call from a television station, I think ABC, that wanted to do a story on the zoo. He told them he was busy with some visitors (that was us) and would call them back later. I still am amazed when I think he spent more than two hours with us discussing every phase of his life as director and what goes on behind the scenes.

He told us that the San Antonio zoo has the most important collection of antelopes in the free-world- 31 species- outside of Czechoslovakia which has a private collection. He said we have the best conditions for breeding these animals. The zoos, generally, he said have an attitude that overflow animals should be sold only to other zoos. The problem, is that there are not enough outlets for them. You cannot have more than one male to a flock of females – if you do they will kill each other. So what do you do with the excess males?

He solved the problem in the following way .There are many ranchers in Texas who care deeply about the animals and give them the finest care. He sells his excess flock to them. Now for example, he said, if he did not do that and his male died, what would he do for another male. This way he can always go to the ranchers to select one from them. It sure made a lot of sense to me. He said they supply antelopes to zoos all over the world – and the antelopes on view in the zoo itself are only a microcosm of the breeding groups they have at the back of the zoo. He told us also that the black buck antelope was completely extinct in the wild. It has been bred successfully in the San Antonio zoo and was recently sent to Pakistan from which this breed originally came.

There was another point that I found very interesting about the hoofed stock (ungulates). It is not advisable to send males and females in to a new exhibit together. He said that you always test with males first. If they survive then, you add the females.

We talked about the big cats. He said the problem is enormous. They can never to re-introduced into the wild because wherever they came from is now populated and people would be in danger. They have stopped breeding most of them. The jaguars are separated – the lions, tigers, leopards are chemically implanted to prevent mating. They have five snow leopards – lent for breeding. He said they sent a pair to the Denver Zoo on loan. That zoo pays for one, and half of the offspring come back to the San Antonia Zoo.

One thing he told me I found fascinating. He keeps the animals lean in the summer and heavier in the winter. The birds are put on a three month supply of corn after breeding, and then after that are put on higher protein feed to build for future breeding. I asked if any birds will breed in winter. He said the black swan will.

Then he started to tell us of his dreams for the zoo. The zoo is 50 years old and zoos at that time had an entirely different philosophy of caring for animals. There were cages, very stark where the animals lived their lives. They were fed well, but the happiness of the animals was not even thought of. Director DiSabato felt quite differently from most of the zoo directors at that time. Without even asking him if animals have feelings, it was so obvious from the way he talked that he and Dr.Thomas had totally different views on that subject. He told me of the future plans for the San Antonio zoo that were now being developed. The zoo was built out of a quarry – natural rock. Many zoos have imitation rock, but here it is for real. The plans were so exciting to us.

There will be a beautiful seal exhibit and one called “Small World”. This will be a multi complex exhibit in which all types of wildlife will be displayed as they would exist in nature. For example, antelope on the ground, colobus monkeys in the trees, birds all around. He wants to completely get rid of the primate house and intersperse the animals in such complexes around the zoo. Just the thought of it made me so happy.

In our conversation I told him of the nocturnal exhibit I saw at the Houston zoo. He told me that the idea originally came from the Bronx zoo which has a superb exhibit of them. We talked about the vampire bats. He told me that they feed them outdated human blood which comes from blood banks or from cattle blood from slaughterhouses. I asked if he could figure out what place the vampire bat has in nature. He said he had not thought about it, but that the bats do not kill large animals because they drink so little blood. He said bats come from antiquity – that all bats are insectivorous – that there are billions of insects in Carlsbad Caverns and that the millions of bats keep the caverns clean.

We had quite a talk about educating the public. He said the have 40 docents who do work in the elementary schools. They work with third grade and up. They are currently developing a high school program for gifted students and the pilot program is on birds. They give the teachers a packet (it reminded me of what I am doing with my teachers manual) detailing say – beaks and feet. In this way when they come to the zoo they are looking for specific things. They were currently working on six film strips – the first one was almost ready. It explains the job of the zoo director, the curators, keepers, and all other personnel that work at the zoo. It is called “a day at the zoo”. What a marvelous way to get people involved! The second group will be about endangered species – the third about birds and their characteristics, etc.
Of all the zoo personnel I met on this trip in 1978, Director Louis R. DiSabato remains in my memory as the personification of the ideal in zoo management. This is a man with huge knowledge of the zoo world, who had enormous feeling for all animals and cared deeply about preserving this world for all future generations. Because I have this feeling about him I checked the internet yesterday to see what has happened with the San Antonio zoo. It is more than 35 years since I was there. I knew at this point he would be retired. I wanted to find out if his dreams were realized.

I was delighted to find out the following: The zoo has expanded according to his vision. He is now retired, but in honor of all he has done for the zoo a Komodo Dragon sculpture was created in his honor. Reading from the internet this is the quote I got. “The sculpture of the Komodo dragon is a life-size bronze. It was placed by the Komodo Dragon exhibit in 1997 as a dedication to the San Antonio Zoo’s former Director Emeritus, Louis DiSabato. The dedication plaque next to the dragon sculpture reads:

“In appreciation for his years of dedicated service to the San Antonio Zoological Gardens & Aquarium, this Komodo dragon bronze is dedicated to Louis R. DiSabato, Director”.