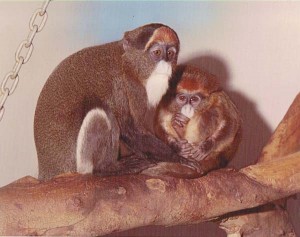 We all have experiences in life that remain with us forever. In 1978 I went to Louisville, Kentucky. It was for a special convention of the National Speakers Association. I had been asked to join them because their director, Dottie Walters had heard of my Suck-a-toe lectures in the schools.

Dottie thought I might be interested in pursuing a career as a professional lecturer. The idea appealed to me because I wanted to go national with the Suck-a-toe story. At the time in the world of animals much was being said about the “Humanity of Animals”. I had spent six years studying Suck-a-toe’s behavior from a frightened baby monkey, abused by his father and not expected to survive to a healthy mature animal who could now take his place in his world as a normal mature adult. He was a De Brazza monkey, at that time considered an endangered species.

His recovery could not have happened without the amazing dedication and love given to him by the nurses who cared for him at the Los Angeles Zoo. For some reason he connected with me when I first saw him when he was two days old. My study of his behavior and that of Missy, his girlfriend was a huge eye-opener for me. Their behavior was similar to human behavior. When Dr. Thomas, director of the zoo and also an acclaimed veterinarian told me that animals have no emotions , I could not believe my ears. In fact when I showed him photos I had showing Suck-a-toe’s obvious distress in certain situations, he told me that it was all my imagination. Animals, he said, feel nothing. In essence, he implied that animals are just muscles, skin and bone.

I found out that in the 70’s there was a huge controversy going on in the zoo world about that very subject. Jane Goodall was one of the spokespeople fighting to change that perception. I think anyone who has a pet recognizes the emotions that their pet feels in different situations.

It was because of Dr. Thomas’ comment to me that I decided to take off a month after the Louisville convention and visit eight zoos on the way back to Los Angeles and speak to the directors to see how they felt about that subject.

I have eighty four pages of notes that I only recently re-read about that trip. I would like to share the first part in this writing.

The first zoo I visited was the St. Louis zoo. I took with me many articles written about the work I had done in the schools, small photos of the 12 paintings of endangered species created and exhibited at the Los Angeles Zoo, and the small instruction book, the Laura Glusha drawing book of the Panda and Penguin created for use in the classroom. I had been told by two of my curator friends at the Los Angeles zoo that I did not have to bring anything. They said, “just go into the administration building, ask to speak to the director-tell that person what you have done and they will give you a hearing. “ That seemed so simple – but I wondered – after all they did not know me.

My husband was with me . Together we decided before knocking on the door of the administration building in any of the zoos we planned to visit to first review the zoo from our perspective. Did the animals seem contented? We hoped possibly to speak to at least one keeper to find if they were respected for their knowledge. It takes a great deal of not only knowledge, but love and care to handle animals properly, particularly the primates. Was the zoo attractive and appealing to the public?

This part of the trip was by bus. We did not want to be tied to a schedule. We had planned a month and I had researched where the buses ran, where motels were in the various parts of the country, how far they were from the zoos and the approximate time needed to get from one zoo to the other. One month was to cover eight zoos.

The zoo closest to Louisville where I attended the convention was the St. Louis zoo. I knew nothing of it before we went. I was amazed at the size of it and how beautifully it was laid out. Before I went there the only zoos I really knew about were the Bronx Zoo, the Central Park zoo, the Los Angeles and the San Diego Zoos. The St. Louis zoo matched in size and beauty any of the finest zoos in America. The animals looked very contented and very healthy and the general look of the zoo was very inviting. Once you were there you did not want to leave.

I did what I was told to do. I knocked on the door of administration and asked to speak to the director. I really wondered how they would receive us.  In each case the director treated us like royalty. There is so much to say about each zoo and their wonderful attributes. Each was special and I look forward to sharing with you in future blogs a picture of the wonderful people we met and yes, – most particularly the keepers and the people in education, did believe that animals have feelings!