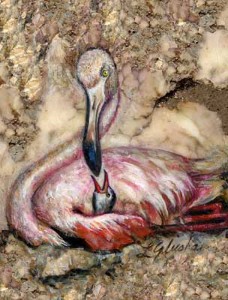 We took an 8:00 AM bus and arrived in Dallas before 9:00 AM. It is a big city with many tall buildings in the downtown area, but it is very clean. The people are friendly and I liked it. We waited ¾ of an hour for a bus but finally got to the zoo. It is a beautiful zoo – very green with beautiful foliage and inviting.

We saw the zoo office at the entrance and walked in, introduced ourselves and met a charming lady in charge of education. She could not see us until 1:00 PM and so let us into the zoo free of charge and gave us a map. The first thing that struck me was the gorgeous greenery- almost like a forest. The first exhibit we saw were the beautiful flamingos in a natural setting. They have many exhibits of small African antelope, some of which I had never seen such as the Dik-dik and the Suni – delightful little antelopes. The bird and reptile exhibit featured many birds including the Bali Mynah. The Bali Mynah was the last bird painting I had done for the Los Angeles zoo. Those birds are completely extinct in the wild and I find it very interesting to see how they are displayed in zoos.

I was impressed with the educational material in the exhibit describing the need for all forms of nature and explaining how reptiles and birds make their place in nature.

The Ft. Worth zoo, as I wrote in my last blog is known for their crocodilians- the Dallas zoo for their rattlesnakes and pythons. According to Chris, the young lady in charge of education, they have the finest collection of reptilians in the world. They also have an outstanding rain forest exhibit for the birds.

The cages for the primates are very old (built in the 1930’s), and quite stark, but they are immaculate, and considering that the animals were not free as I had seen in other zoos, they actually looked in marvelous condition. They are lively and their pelts were in superb condition. They had a family of De Brazzas, one adult male and two females and two young babies .

For the first time in my life I saw the Proboscis monkey. That species has a huge nose. At that time there was a famous comedian, Schnozzle Durante who became famous because of his comic act about his own nose and let me tell you, this monkey sure looked like the comedian.

They had the most magnificent silver back male gorilla I had ever seen. I was quite familiar with gorillas because after Dr. Thomas sold Suck-a-toe and Missy, I decided to spend time at the gorilla exhibit. I thought I would do a study of them and perhaps produce another book. However, although I found studying gorilla family life very fascinating, nothing happened at that exhibit that would make for a good story. I will say that this male gorilla was just outstanding. He had a fantastic coat. I can say the same thing about the Orang-u-tans. Their fur was in superb condition. Because of my experience at the Los Angeles zoo with Suck-a-toe and Missy, who were De Brazza monkeys, I was keenly aware of how the coat or fur of an animal tells the health of the animal. When I later met the keeper, Michael Troop who was in charge of the primates I asked him about their food. They are given a superb diet including vitamins, jello, rice and a full supply of fruits and vegetables. At the Los Angeles zoo the food was adequate, but not nearly as balanced a diet as here at the Dallas Zoo.

By now it was time to return to the office to meet with Chris. In some cases I did not talk about Suck-a-toe until after a long conversation. In this case, she wanted to hear about it first. Chris and her assistant were really excited about the story and also about the work I had done in the schools. It turns out that she had been a school teacher (high school level) for a few years and had always been interested in wildlife. She had worked with the animals as sort of a junior keeper and three years ago became head of education. Her husband is a herpetologist (one who works with snakes etc.) with the museum.

She told us that Dallas is a very conservative city and that the zoo is under the jurisdiction of the Dept. of Parks and Recreation which is also very conservative She has had a terrible time awakening them to the need for education and mostly publicity. Her job for quite some time was a real catch-all and among the million duties she also had to run the petting zoo.

She told us they have a zoological society that can only buy animals and library books (she has an excellent library) but nothing else can they do. She has marvelous ideas, is charming and inspiring and from 22 docents (of which one was a man) last year, this year she has 40. These docents are really dedicated and because of that she is giving them a twelve session training program to prepare them for going into the schools. They lead tours at the zoos similar in a way to what GLAZA does at the LA zoo. They are forming their own non-profit organization and will become the umbrella for the education department. They are trying to bring their education of animals to the college level. She said the county has excellent colleges and they have approached her before this to put on a program, but she did not have the facilities. She said one of the problems they have is that many of their supervisors are animal people who do not have the education to really promote what they are doing to the public. They have no public relations department which is probably what they need.

We had a discussion about the primates. She said they were all breeding well, but with both the chimps and orangs the females were not interested in raising their babies. As with Suck-a-toe, they are being raised in the children’s zoo by nurses.

I found the story of this beautiful male gorilla very interesting. He does not like the ladies. He won’t even play with them. They like him but he definitely does not like them. So, finally in desperation they decided they will ship him to another zoo. They bought an eight year old male who had not yet arrived when we were there. Hopefully he will like the females. Gorillas are definitely endangered and it is very important to the zoos to have a successful breeding program

She told me the same thing that I heard in other zoos. The cats breed too well and there is no place to keep them or to send them, so they chemically implant them to stop the breeding. As with the St. Antonio Zoo they are very successful with all types of hoofed stock.

After a delightful conversation about the Dallas zoo, Chris asked me if I had ever held Suck-a-toe. For me it was so painful that I was never allowed to touch him. One could see by his actions how close he felt to me. I told her that I never did. She told me that she felt they were wrong – that it would have been good for both Suck-a-toe and me had I been permitted to hold him. She said, “I don’t have Suck-a-toe here, but we have two adorable baby orang-u-tans. They are Damon, the male and Dumplin, the female. She said if I would sign a release that if anything happened I would not hold the zoo responsible, she would allow me to go behind the scenes to play with them. I jumped at the chance!!

It was such a delight to play with them. As I walked in they both eyed me quite suspiciously and then jumped on me encasing me in their arms! I could not get over their enormous strength, and also how soft their skin was. I felt like I was playing with two mischievous human children. I will ever be grateful to Chris for that wonderful opportunity.

We had covered the zoo, spoken to two of the keepers who were totally devoted to their animals. We really liked Texas. The people were so friendly but It was time to move on. We were on our way to Albuquerque.